Valenzuela City’s Public Employment Services Office (PESO) is known to be an effective employment catalyst in the city, catering to the needs of Valenzuelano job seekers. They have been recognized for their exemplary work, having been awarded Best PESO and Hall of Famer in 2019 by the Department of Labor and Employment. In its constant pursuit to do better, the office is aiming to strengthen its support especially for the vulnerable out-of-school youth (OSY).

The 2015 census indicates Valenzuela City population was over 620,000, the majority of which is composed of the youth. As of 2017, the city’s Community-Based Monitoring System recorded at least 3,500 OSYs. This number is estimated to have grown significantly as education and training services were affected at the onset of the pandemic.

When USAID Opportunity 2.0 began early in 2020, one of its objectives is to establish Youth Development Alliances (YDA) in the cities it is working with. YDA, as a mechanism, enables the city (led by the local government) to gather youth-serving leaders, agencies, organizations from both public and private sectors so that, together, they can craft policies and programs that more accurately serve the needs of the youth in the community. For Valenzuela City, this group of stakeholders is dubbed as the Task Force on Out-of-School Youth.

By July 2021, Opportunity 2.0 supported the YDA’s Strategic Planning in Valenzuela City, enabling them to identify the next year’s priority activities that will make the YDA stronger and serve the OSY better. PESO was one of the participants of the session, their office was key in linking OSY to skills training and employment opportunities. Through the process, Head of Valenzuela City PESO Ms. Josephine Osea realized her office previously has not specifically targeted OSY for employment and development.

(What we usually do is for the general public. But now, a path has been created for us to focus on the youth, especially the out-of-school youth. With USAID Opportunity 2.0, we geared towards helping the youth, and I realized that we can still do so much. I saw that the future of our community really rests on the youth as well.) 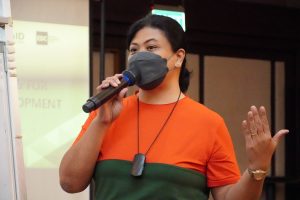 According to Ms. Ophie, the strategic planning session served as an “eye-opener” for PESO, especially in reinforcing the youth’s vital role in long-term community development. “Totoo pala na ang youth ang pag-asa ng bayan,” she added. (The youth truly is the hope of the nation.)

Valenzuela is a first-class, highly urbanized city where manufacturing is among the major investments. The growth in this industry maintains an upward trajectory, however, not all OSY who wish to find jobs and start careers are guaranteed employment because of job-skills mismatch or skills gap.

In addition, the youth often have difficulty acquiring appropriate documentary requirements, barring their chances to land a job commensurate to their potential. Their lack of a high school diploma greatly affects their chances of gainful employment, especially the female youth. Most are offered low wages and others have to compete with other job seekers for the same minimum wage positions.

Earlier this year, Opportunity 2.0 supported the Valenzuela City’s Task Force on Out-of-School Youth, led by Councilor Chiqui Carreon, in launching the Youth Profiling Form, which allowed for identifying appropriate and relevant education and employment assistance and opportunities for the city’s OSY. The Valenzuela YDA also completed a Local Labor Market Assessment this year which helped them find out which key industries in the city had the best opportunities to offer for the youth and what kind of skills are in demand by local businesses.

“I will meet with Councilor Chiqui to discuss how we can work together on our skills mapping. We currently have [officers] under the Government Internship Program going around for the skills mapping [for the general population.] They will go around the barangays until September. I will ask the Task Force on OSY how we can align these efforts. We are also working with the DOLE to create a system to consolidate all these gathered data,” Ms. Ophie said. 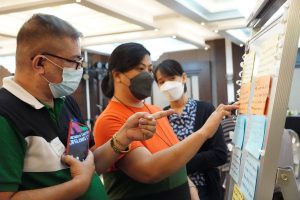 On its way to improving services to Valenzuelano youth, the PESO, in collaboration with Valenzuela City YDA, could establish a consortium of various training providers in the city, and reinforce local policy requiring businesses and employers to provide information on job vacancies and that they would accept referrals for employment for PESO. The OSY referral system could also be enhanced and systematized to improve their chances of employment and training.

Led by Ms. Ophie, the Valenzuela PESO immediately got to work to clear a path for youth-centered programs to reach out to the local TESDA and Junior Chamber. They also realigned with local businesses like CDO-Foodsphere, Inc. to see if they can help fill in vacant jobs.

“Talagang na-motivate ako after our [YDA] Strat Planning,” shared Ms. Ophie. (I was really motivated after our [YDA] strategic planning). She said, “We really need to recognize youth’s capabilities, that through them, we will be able to achieve development in our communities. The youth will lead us to a better future, and if we will make them good leaders, the next generation will surely benefit from this, including our economy.”#