As the second largest metropolitan area in the Philippines, Cebu is a fast-growing city with international air and sea ports. The construction industry is thriving and presents many career opportunities for young people.

“At first, I really wasn’t interested because the opportunity was for men. Training course slots available were on construction,” said Joel Cuyos, a 21-year-old from Cebu City. He first heard about a chance to train for free to be part of the construction industry in Cebu City through a friend. As a young man who identifies as gay, Joel initially thought a career in construction was not for him. 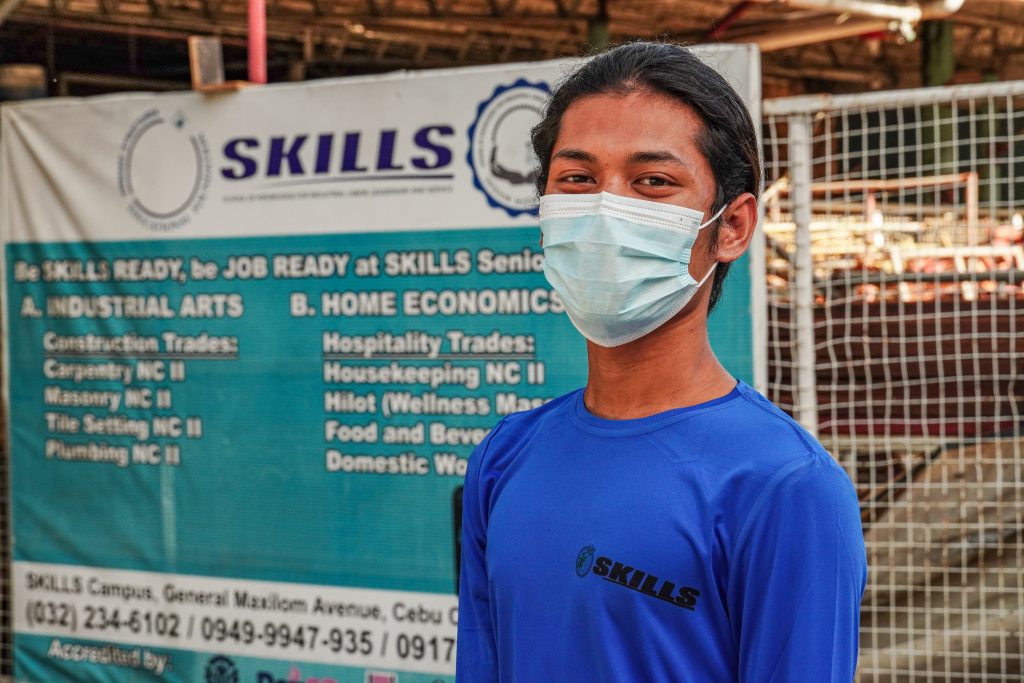 Local academic and training institutions like the School of Knowledge for Industrial Labor, Leadership and Service (SKILLS), Inc. have to overcome misconceptions about careers in construction. With USAID’s support SKILLS, Inc. is able to do this. Through a USAID grants program, local training institutions are able to open up slots specifically for marginalized Filipino youth in the Philippines.

“I was an out-of-school youth because I didn’t have papers. All requirements now require some online filing and I don’t have access to that,” he said. Since he couldn’t afford to continue education, Joel has been working since he was 19 years old to help his family. He previously worked as a maid and then as a housekeeper. His father is a laborer, his mother is a housewife, and he has nine other siblings.

Through his friend’s encouragement, who was an LGBT youth leader in his community, he was persuaded to take up a plumbing course at SKILLS, Inc. in 2021.

“At first my family was not very supportive. But I asked them not to be like that. I was trying my best to find a job. I just want to support my family. I want to see them happy.”

Banking on a strong support system

“I almost gave up at one point,” recalls Joel. “During work immersion, we had to stay-in at a construction site quite far, outside the city. Somebody touched me and I was uncomfortable.” As a member of the LGBT, Joel’s initial concerns were valid. Studies have shown that a significant number of LGBT people have experienced some form of harassment, bullying, or discrimination at work because of their sexual orientation or gender identity.

With a supportive supervisor, personnel safety procedures were upheld on site. “He stopped,” said Joel about the co-worker who stepped on his boundaries. “But I also kept my distance because of it. Other workers there were very supportive and encouraging,” he said.

They barely had enough budget to commute weekly to work too but his friends helped him make limited finances work to finish their training. Throughout the months of training, Joel found himself thoroughly enjoying his classes and even became friends with his classmates. Halos lahat ng naging ka-klase ko naging friend ko.

Young people like Joel, who are more likely to face discrimination in the workplace, are more likely to overcome challenges when they have peers that support them and workplace mentors who guide them and protect their pathway to success. This is what SKILLS, Inc. was able to provide marginalized youth through USAID’s support.

Reaping the fruits of determination

After the work immersion, Joel and his friends were surprised to find that that they passed their assessment on the first try and are set to receive national certification from the Technical Education and Skills Development Authority. “We were offered jobs right after that!” Joel proudly said. Anytime pwede kayo pumunta dito basta ready na kayo sabi ng supervisor namin. “They’re waiting for me to start working at the site,” said Joel who was in the middle of making sure he had proper documents this time.

“There are many more out-of-school youth in my community. Some are because of early pregnancy. Some are short on finances. I encouraged them to also pursue jobs in construction. I said, it isn’t so bad to work in a construction site. In fact, the pay is great. Here, they don’t look at your grades but at your skills and what you can do,” said Joel. “If you want to achieve something, go for it. Don’t think about your sexual orientation, gender identity, or how you look,” Joel concluded.

Through its Opportunity 2.0 project implemented by Education Development Center, USAID has been able to support local training institutions cater to thousands of out-of-school youth through grants, capacity building, and curriculum enhancement.

As youth gain easier access to opportunities for further education or training that lead them to better jobs and business start-ups. This program contributes to the U.S. Government’s initiative to promote accessible quality education and training for all as well as to expand inclusive and market-driven growth.

Cotabato City org help restore OSY education through O2 grant
Two years after the pandemic hit the Philippines, distance learning remains a challenge for ALS in Cotabato City. As of January 2022, there is over 7,000 out-of-school youth (OSY) in...

Out-of-school youth gain employment through city’s collaboration
Like many farming families in the Philippines, 23-year-old Jessie Mapagdalita’s family does not own the land they till. His kuya has to take on construction jobs when he’s not farming...

OSYs championed in Valenzuela City employment services
Valenzuela City’s Public Employment Services Office (PESO) is known to be an effective employment catalyst in the city, catering to the needs of Valenzuelano job seekers. They have been recognized...

263 more OSY complete TESDA Online Program with USAID support
The U.S. government, through the United States Agency for International Development (USAID) has successfully supported 263 Filipino out-of-school youth (OSY) gain much-needed tech-voc training through the TESDA Online Program or...
This website uses cookies to improve your experience. We'll assume you're ok with this, but you can opt-out if you wish. Cookie settingsACCEPT
Manage consent